Thermage vs Coolsculpting vs Exilis Get Your Best Beach Body Now

These two machines are clearly the leaders in the industry.  However you really have to look at what’s going on and who is advertising more.  In fact now that Thermage is owned by a big conglomerate they are not doing any advertising at all.  Whereas Cool Sculpting  ( Zeltiq)  is going to spend 40 million this year advertising.  Let’s start with a  Coolsculpting before and after so you can actually understand what    I’m going to say.

This is a Coolsculpting before and after.  Lets start with what should be obvious.  They claim 3 million procedures but they only show less than a dozen before and afters.  So this is the one in a million best result.  Yes there is a lot of reduction.  ( they claim the patient was within 5 pounds of the before picture) So we will take their word for that. But you can see the patient in the after picture is lumpy.  Every person I have spoken to who has done Coolsculpting had said they did come out lumpy.  In fact the people who sell the acoustic wave machine ( acoustic wave is used for Cellulite), say that one of its greatest uses is to get rid of the lumps that are left over after a cool sculpting treatment.  Coolsculpting takes a few treatments to get a result and you have to wait a few months to see the results and where you are lumpy and where you need additional treatments.  I dont understand why someone would spend thousands  of dollars and do a number of treatments to actually create a result that requires another treatment.  Forget about the fact that we are not totally comfortable with where and how the cells that are frozen and killed are dealt with.  Believe me I am tempted to buy one if for no other reason then the public has bought into it.

So now lets look at a Thermage before and after.  I have hundreds of Before and afters but i will use one to demonstrate my point and then show you a more dramatic one.

However to be clear, Thermage’s sweet spot is loose skin. Here is a dramatic example.

HERE IS A MAJOR DIFFERENCE

Use your common sense.  Coolsculpting kills fat cells period.  Pretend you took a sausage and took out (or killed) a decent amount of fat enclosed in the skin or casing.  Great, you got rid of some fat, as the results show. But you are left with the same skin.  Now relatively speaking you did it non surgically so that can certainly can be considered a step up from surgical liposuction and of course a reason for all the excitement.  But Thermage gets the same results by a different method that is relatively speaking all natural and leaves you smooth.  Thermage is a radio frequency device. It is calibrated to affect the collagen layer.  The collagen holds back the fat.  In addition there is some apoptosis or killing of fat cells as well. So what happens when you are treated is there is an immediate tightening of the collagen layer.  In addition 3 months later because you have stimulated the collagen layer, your body grows new collage which smooths out the skin and improves texture and creates a secondary effect that continues for up to 6 months.  Now look at the pictures again and see if you understand looking at the pictures and understanding how they work.  Also Thermage is a one time treatment. The television show the doctors claimed they measured 3 inches right off the table after a thermage treatment. But there are limits to non surgical treatments.  Neither Thermage nor Zetiq are claiming to help obese people as the before and afters demonstrate.

BUT HOLD ON THERE WHAT ABOUT EXILIS ??

Exilis was introduced to New York by Dr Lisa Zdinak of Precision Aesthetics in 2010.  Again a no marketing company.  She found this celebrity secret at the anti aging show in Monte Carlo at the largest European medical conference for Anti-Aging and beauty. ( PS thermage is claimed to be the secret of Gwyneth Paltrow and many other A list celebrities)  Exilis is like Thermage in that it is radio frequency. Unlike Thermage it requires multiple treatments at least 6 for a body area.  But there in lies the beauty, you can continue to treat with Exilis for an even more dramatic reduction.  Check out these results. 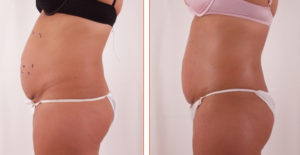 Conclusion.  Exilis is the hands down winner for a lot of fat.  ITS FDA approved for non surgical fat reduction. So you dont even have to stop here with these results, you could just keep treating for more results. Also Exilis results can be seen in 10 day vs 3 months for fat freezing or coolsculpting.